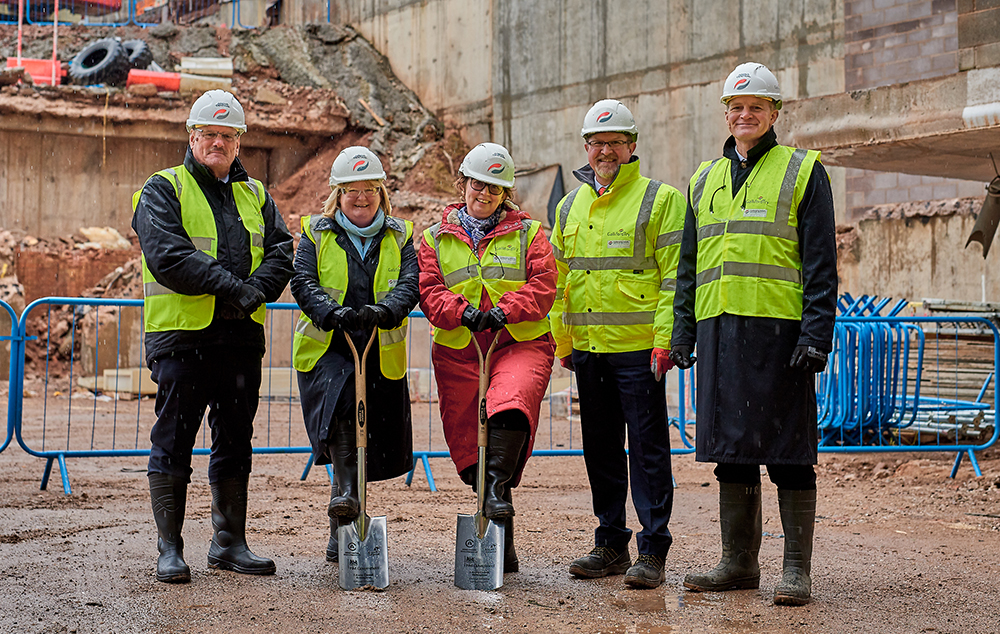 Work has officially commenced on 3 Arena Central, the latest building at the Birmingham city centre development.

The full 240,000 sq ft building has been pre-let on a 25 year lease to the UK Government, with the development funded by L&G.

Representatives from developer Arena Central Developments LLP (ACDL), funder L&G and the government were on-hand to mark the official start of development of the 14 storey building.

3 Arena Central will see more than 3,600 civil servants move there by 2020 from a number of departments including HM Revenue and Customs (HMRC), the major occupier, and the Department for Work and Pensions.

The building is situated on a plot at the heart of the 9 acre city centre development site.

Andrew Sutherland, ACDL, said: “Marking the start of construction on a building is always an exciting time and we are exceedingly pleased to be joined by our colleagues from the Government to mark this momentous occasion.

“From a development perspective, the start on site of 3 Arena Central is a big step as it enables us to maintain momentum on the site as we near the final stages of delivery of the new HSBC UK ringfenced bank HQ at 1 Centenary Square.”

Steven Boyd, HMRC’s Estates Director, said: “This is an important milestone in the delivery of the Government Hub in Birmingham, which will be the new home for HMRC in the West Midlands. The HMRC team is looking forward to taking hand over of the building to begin fit out.

“When it is built, the new building will mean our staff can work in a modern and bright environment, while working collaboratively with other teams, to increase our effectiveness in collecting taxes. The building work is just the beginning of cementing HMRC’s presence in the local community to create a tax authority fit for the future.”

Matthew Briggs, Programme Director, DWP, said: “Birmingham has an important role to play in our services for a range of DWP benefits. Moving to the new hub will provide a more efficient working environment than our current offices in the city, giving us greater flexibility to meet changing customer and business needs.

“By sharing and making the most of this modern office space, colleagues can enjoy a great place to work while having access to more opportunities to develop their careers.”

Ann Carter-Gray, Government Property Agency Programme Director, said: “Arena Central will be part of a network of government hubs, transforming central government’s offices by accommodating many different departments in shared buildings in cities across the UK. The new Birmingham hub will be a catalyst for regeneration and the modern design will make it easier for civil servants to collaborate and work flexibly, delivering the best quality service to the public.”

Designed by renowned architectural practice Make, 3 Arena Central will be clad in a geometric pattern of hexagonal metal panels, with a double-height colonnade along the northern face opening directly onto the site’s main public square, Bank Court.

The site will have excellent transport connections being close to New Street Station and the planned Midlands Metro extension.  Limited secure parking and cycle racks along with associated lockers and shower facilities will be provided in a dedicated basement car park directly below the building.

CBRE and GVA are appointed as joint letting and investment agents to Arena Central.