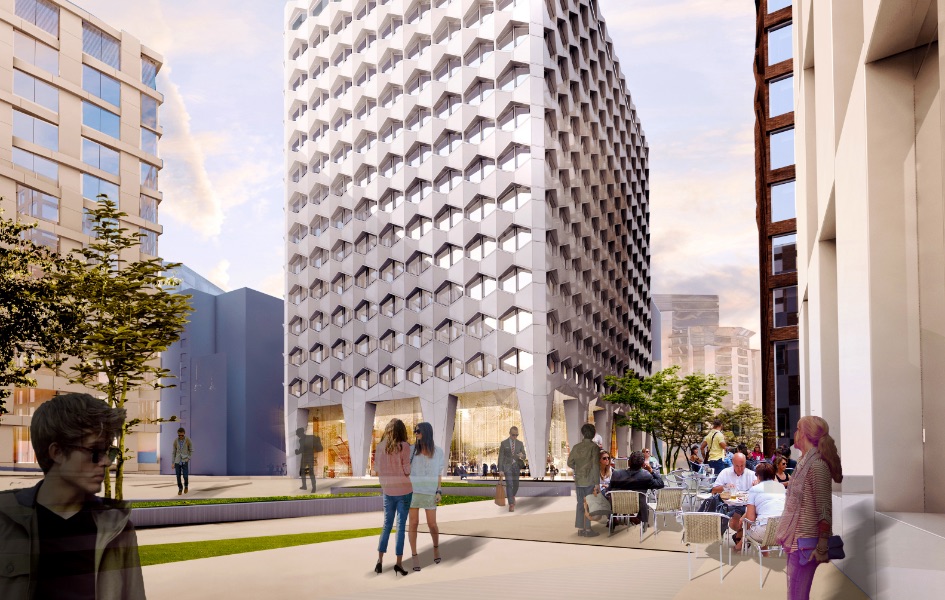 Birmingham’s Arena Central development has completed a letting for 240,000 sq ft to the Government in a development to be funded by Legal & General’s (L&G), representing the largest pre-let to take place in the city in a decade.

The UK Government, advised by JLL, has committed to take the full 3 Arena Central building to house a number of government services including the Midlands regional hub for HM Revenue and Customs (HMRC).

The Government has committed to a 25 year lease for the 14 floor building which has planning consent in place, and which will accommodate some 3,600 civil servants.

3 Arena Central will be situated on a plot at the heart of the 9 acre city centre regeneration site, with demolition and site clearance work due to commence imminently and the building handed over for fit out in spring 2020.

3 Arena Central will have efficient floorplates of 18,299 sq ft set around an offset core and has been designed to meet BREEAM Excellent.

Andrew Sutherland, Miller Developments, said: “We are naturally delighted that 3 Arena Central has been selected by the Government Property Unit to house its requirement.

“Following so closely behind the selection of 1 Centenary Square by HSBC as the home of its retail bank, this truly demonstrates the inward investment appeal of both Birmingham as a city and Arena Central specifically as a destination.”

Legal & General has already invested £12 billion in UK infrastructure, direct investments and urban regeneration projects, and is committed to modernising Britain’s great cities as it aims to invest £15 billion.  It has forward funded this development on behalf of its annuity fund.

Adam Kerr, Head of Annuity Transactions, LGIM Real Assets, said: “There is currently more capital committed to infrastructure projects in Birmingham than any other European city.  We believe that this latest investment will make a meaningful impact to the continued regeneration of this area, helping to create social and economic growth. At Legal & General we have a commitment to improving our built environment, investing in cities across the UK to bring about urban centres that are fit for purpose and that are better places to live and work.”

Neil Rami, chief executive of the West Midlands Growth Company, said:“The Arena Central deal is significant. A public sector hub of this scale will have a positive impact on investor confidence in the region’s commercial property market. We envisage further opportunities as the government repurposes its estate and non-departmental bodies assess the benefits of relocating out of London.”

Councillor Ian Ward, Interim Leader of Birmingham City Council, said:“This investment by the Government in Birmingham City Centre is a major vote of confidence in the city’s continued regeneration. It reflects the importance of our strategic location, improved connectivity and extensive skills base.”

Kelvin Craddock, JLL director of Tenant Representation, said: “Arena Central was selected after a comprehensive review of options, focussing on a broad range of criteria including cost efficiency to deliver savings for the government estate. The appeal of a self-contained building and the environment being created were big positives in selection of Arena Central. JLL is immensely proud to have advised on this landmark deal for Birmingham.”

Designed by renowned architectural practice Make, the building will be clad in a geometric pattern of hexagonal metal panels, with a double-height colonnade along the northern face opening directly onto the site’s main public square, Bank Court.

Secure parking and cycle racks along with associated lockers and shower facilities will be provided in a dedicated basement car park directly below the building.

JLL and Eversheds acted for the Government in the completion of this deal, Pinsent Masons advised Arena Central Developments Limited, and Savills and Squire Patton Boggs acted for Birmingham City Council.

CBRE and GVA are appointed as joint letting and investment agents to Arena Central.

Adjacent to the Library of Birmingham and framed by Centenary Square, Holliday Street, Bridge Street and Suffolk Street Queensway, Arena Central is a key commercial development for Birmingham.

The site has outline consent in place for over 1 million sq ft of commercial space, including the 135,000 sq ft 1 Arena Central and 210,000 sq ft 2 Arena Central, the building selected by HSBC for the headquarters of its new ringfenced banking division, which following the inclusion of the fit-out will be handed over in early 2018.

Just a few minutes’ walk from New Street Station and the Grand Central shopping centre, connectivity at Arena Central will receive a further boost from the extension to the Midlands Metro tram, which will include a stop adjacent to the site on Centenary Square.