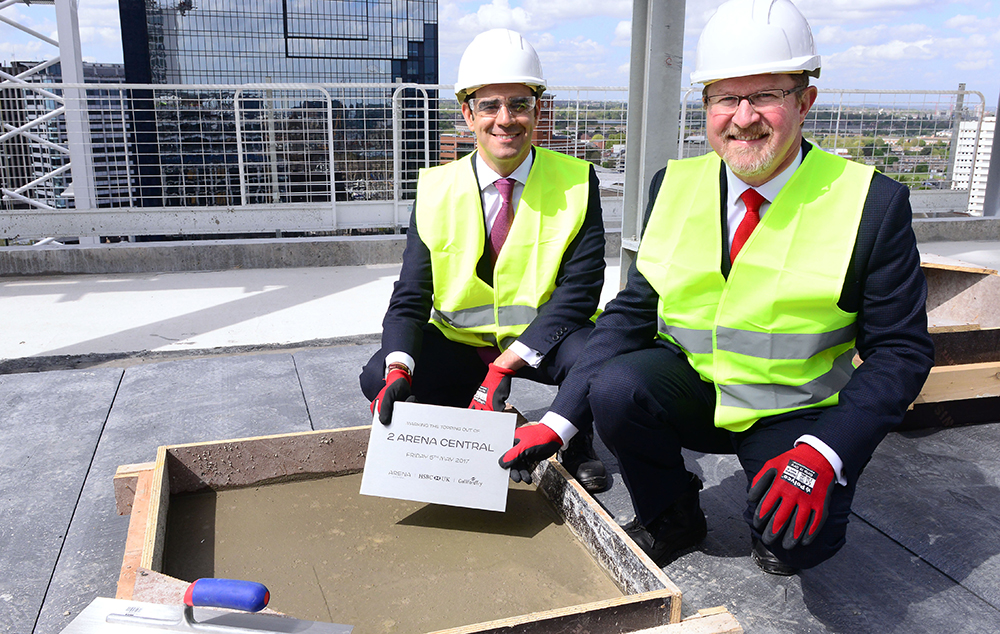 Work has reached a major milestone at one of Birmingham’s leading commercial developments, with the topping-out of HSBC UK’s new head office at 2 Arena Central, which has been renamed 1 Centenary Square.

The event was marked by the pouring of the final section of concrete on the building’s 10th floor and the setting of a commemorative plaque by Andrew Sutherland of Miller Developments and Antonio Simoes, CEO of HSBC Bank plc.

The building was forward-purchased by HSBC in 2015 and will be the head office of a new ring-fenced bank serving personal and business customers.

The 210,000 sq ft, 10-storey building is being delivered by ACDL, a joint venture led by Miller Developments, and is due to be handed over to HSBC later this year, with occupancy from 2018.

Andrew Sutherland, joint-Managing Director, Miller Developments, said: “The topping out of a building is always a significant stage in its delivery and we are delighted to have been able to share this milestone with HSBC UK and our colleagues at Galliford Try who, along with our respective team members, have worked tirelessly to get us to this point. This will be a world-class building for Birmingham and the wider region and I look forward to our continued partnership with HSBC UK and to handing over the completed building later this year.”

Designed by renowned architect Ken Shuttleworth of Make Architects, the building has the capacity to accommodate up to 2,500 people and will be the first in Birmingham to be constructed to LEED (Leadership in Environmental and Energy Design) Gold accreditation.

Antonio Simoes, CEO of HSBC Bank plc, said: “The creation of HSBC UK’s new head office in Birmingham provides us with a once in a lifetime opportunity to build a new and better bank for our customers and people. It’s important that our new head office reflects our brand, culture and heritage and we have been working hard to create the right infrastructure and environment. We’re proud that our new head office will be one of the greenest buildings in Birmingham and we believe its location at the heart of the UK will help us get closer to our 17 million customers across the UK.”

Mick Laws, Galliford Try Midlands and South Divisional Managing Director, said: “We have made excellent progress so far with this flagship project and we are delighted to able to come together with ACDL and HSBC UK to celebrate this milestone. This new building is set to make a real contribution to the ongoing redevelopment of Birmingham city centre and we look forward to working with our partners to complete the vision set out in this project later this year.”

Adjacent to Centenary Square and the Library of Birmingham and framed by Broad Street, Holliday Street, Bridge Street and Suffolk Street Queensway, the 9.2 acre Arena Central development is a key commercial development for Birmingham.

The site has outline consent in place for over 1 million sq ft of office-led, mixed-use development including the 135,000 sq ft 1 Arena Central and 240,782 sq ft  3 Arena Central.

Just a few minutes’ walk from New Street Station and the Grand Central shopping centre, connectivity at Arena Central will receive a further boost from the extension to the Midlands Metro tram, which will include a stop on Broad Street, adjacent to the site.