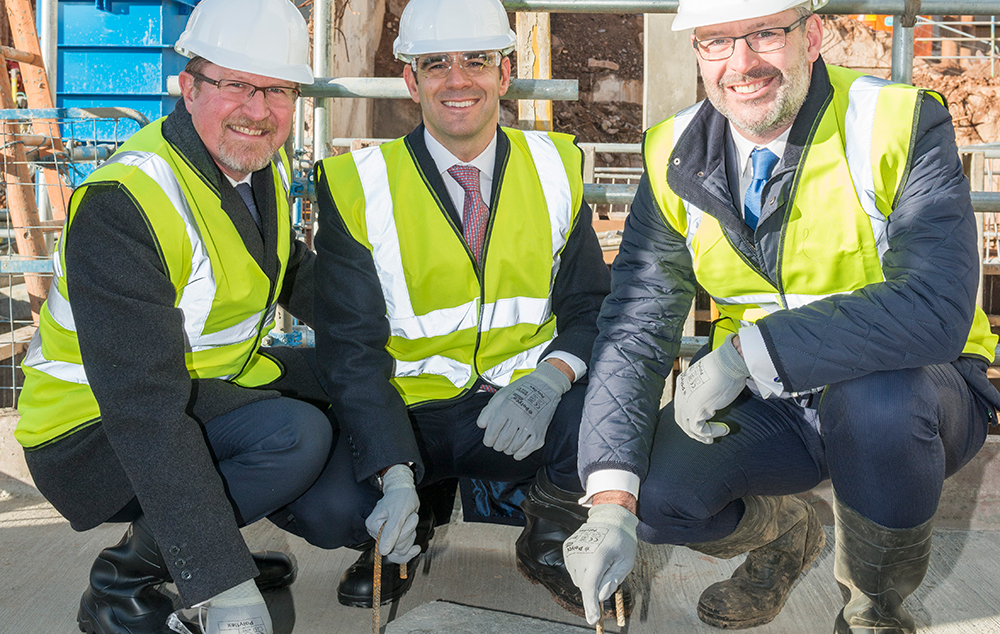 A time capsule has been buried by HSBC in the foundations of 2 Arena Central, the building that will become the headquarters of their ringfenced retail bank.

The capsule, which will be sealed for 250 years – the length of the Bank’s lease on 2 Arena Central – was buried by Antonio Simoes, CEO of HSBC Bank Plc.

He was joined by members of the executive team and national and regional colleagues at the event, alongside Andrew Sutherland and Jonathan Wallis from Miller Developments.

The canister contains a selection of items that will provide future generations with an insight into HSBC’s history and international scope, and Birmingham’s unique heritage.

Designed to provide a snapshot into everyday life in 2016, the capsule’s contents included:

– A silver medal designed by Birmingham Jewellery School student Stephanie Wills as part of a competition to find the best image. She created a timeline of HSBC and the Midland Bank in Birmingham on one side of the medal, and images of the city together with the HSBC logo on the other. It was produced with the support of the city’s jewellery quarter.

– Three HSBC historical images including a photograph of the headquarters of the then Birmingham and Midland Bank under construction on New Street in the 1860s, an engraving of the completed building in 1869, and a photograph of the ground-breaking ceremony for HSBC UK’s new head office at Arena Central last year.

– The ‘Positively Birmingham’ book exploring the new architecture of the city in words and pictures by Birmingham resident Jonathan Berg.

– A gold whistle made by Birmingham’s Acme whistle company, whose whistles have been used for security and safety purposes and at sporting events for more than 135 years.

– Coins, banknotes and postcards from HSBC locations around the world, including a commemorative HKD 150 note from our Hong Kong home market marking HSBC’s 150th anniversary.

– A biography of local author JRR Tolkein. His mythical adventure books are said to be inspired by his family home in nearby Sarehole.

– A 2016 football ticket to a match that saw Birmingham City beat rivals Derby County by three goals to none on 6 January 2016, to celebrate Birmingham’s rich football history. One of the UK’s oldest football teams, Birmingham City was founded in 1875, a year after its neighbouring team Aston Villa.

– The latest edition of the Birmingham Post, the city’s weekly newspaper that has keeping residents updated on local news since 1857.

The capsule also contained a number of drawings by the children of employees, depicting their vision of what the bank of the future might look like, created as part of a competition to celebrate the placing of the time capsule.

Work on 2 Arena Central is now well underway and is on-track for completion in 2017.  To keep up to date with developments on site, visit our Progress page to view the time lapse camera video and photos from the site.