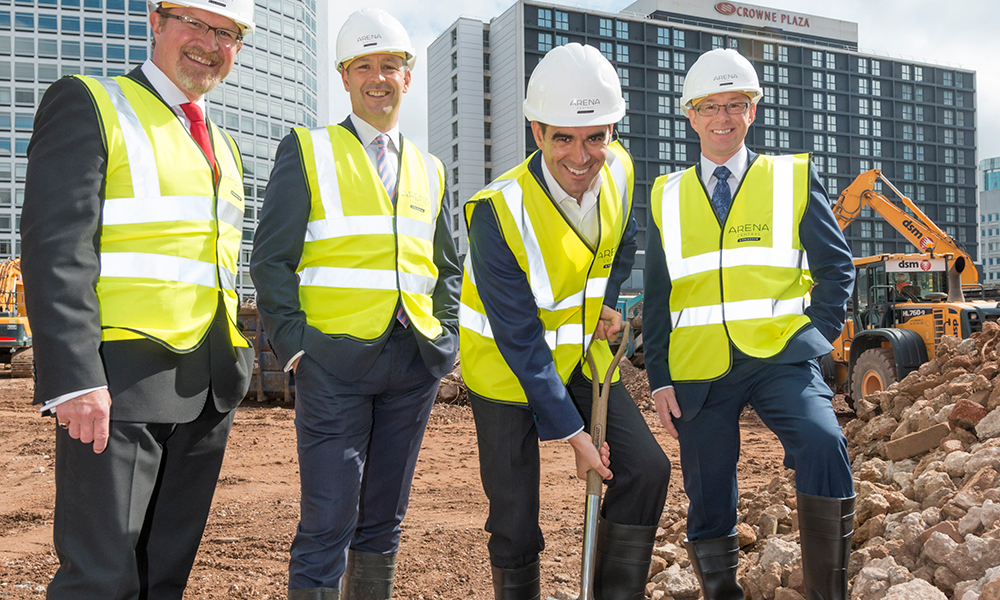 Construction has begun on the new head office of HSBC’s ring-fenced bank at 2 Arena Central in Birmingham, which will be home to up to 2,500 HSBC employees from early 2018.

Situated in the heart of Birmingham city centre’s Enterprise Zone and adjacent to Centenary Square and the Library of Birmingham, the 9.2 acre Arena Central site has been masterplanned for the delivery of over 1 million sq ft of office-led, mixed use development.

Demolition and site clearance at Arena Central has been underway for several months and the start of the construction phase of the project was marked by a groundbreaking ceremony attended by Antonio Simoes, CEO of HSBC Bank plc, and Andrew Sutherland, Managing Director of Miller Developments.

Work on the 210,000 sq ft 2 Arena Central, the largest building currently being delivered in Birmingham city centre, is due to be completed and the building handed over to HSBC in mid-2017, ready for occupation from early 2018.

Alongside 2 Arena Central, work is also taking place on the delivery of the site’s brand new, £10 million public realm which will feature over 50 per cent soft landscaping, creating a unique environment in the heart of the city.

Andrew Sunderland, Miller Developments, said: “The delivery of both 2 Arena Central and the public realm is a hugely exciting time and marks the beginning of the next stage in the life of this important strategic site.

“We have been working closely to ensure that 2 Arena Central is a commercial location that aligns with the requirements of HSBC as an occupier and will continue to do so throughout the build process, ultimately delivering one of Birmingham’s highest-quality signature buildings to a premier occupier.”

HSBC announced in March its decision to create the head office of its ring-fenced bank in Birmingham. As a result, around 1,000 head office roles will move from London to Birmingham before the ring-fencing deadline of 1 January 2019. The city is already home to more than 2,500 HSBC employees.

Representing the largest property deal to take place in Birmingham since 2002, HSBC has acquired 2 Arena Central on a 250-year lease, reflecting the company’s long-term investment in the ring-fenced bank head office.

Antonio Simoes, CEO of HSBC Bank plc, said: “Creating the head office of our ring-fenced bank in Birmingham brings us closer to more of our customers and employees across the UK and supports our ambition to be the bank of choice. The start of building work at our future home in Arena Central marks an exciting step in the creation of our ring-fenced bank and our commitment to Birmingham.”

Designed by renowned architect Ken Shuttleworth of Make Architects, the building will be 10 stories high and have three stories below ground. It will be the first building in Birmingham to be constructed to LEED (Leadership in Environmental and Energy Design) Gold accreditation.

Arena Central is bordered by Broad Street, Bridge Street, Holliday Street and Suffolk Street Queensway and is adjacent to Centenary Square, one of Birmingham’s most high-profile public spaces which is due to undergo a comprehensive £8 million refurbishment.

The extension to the Midland Metro tram, work on which is already underway, will include a stop on Broad Street, directly adjacent to Arena Central, further enhancing the site’s connectivity to the rest of the city.