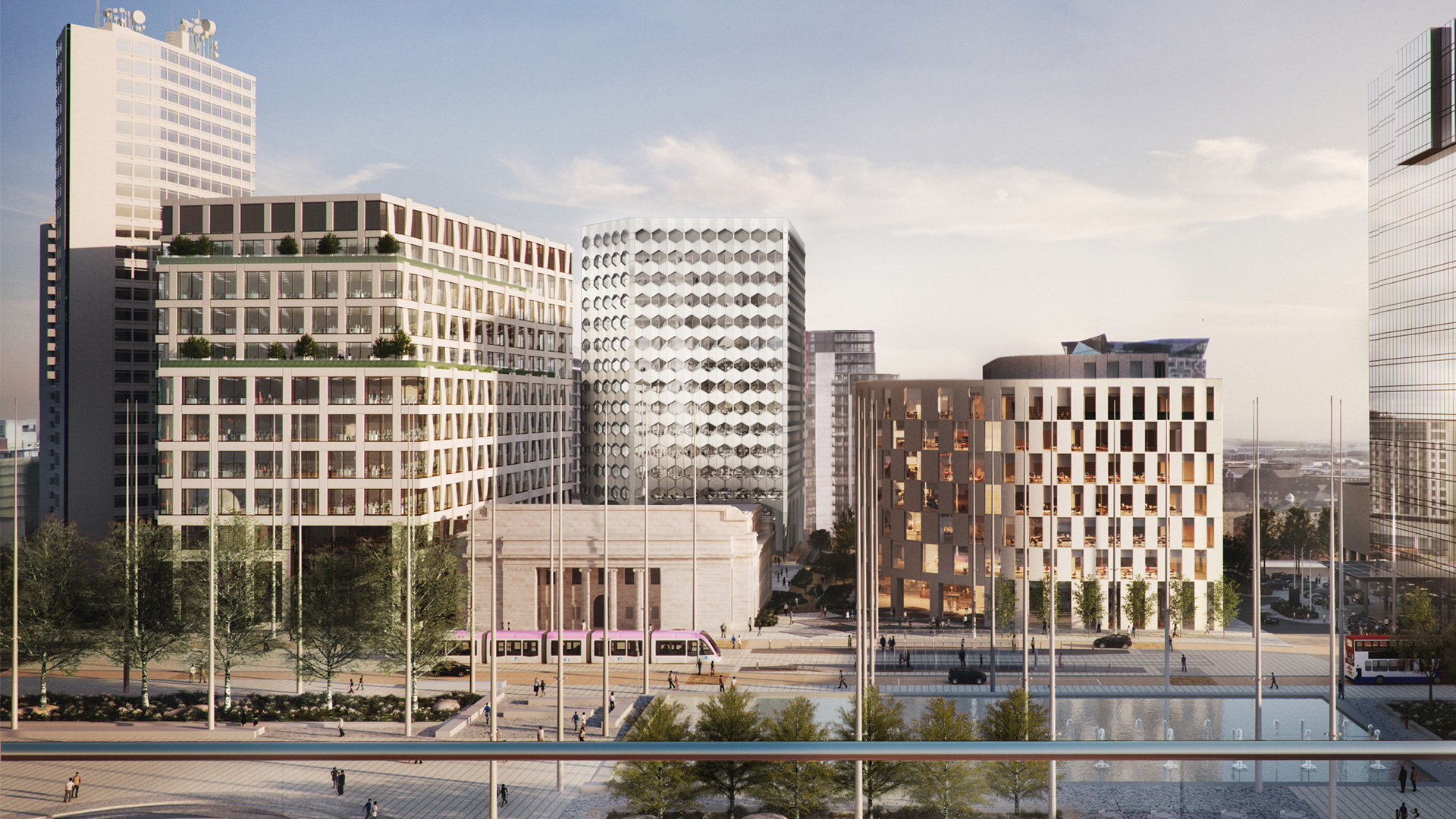 Arena Central Developments Limited (ACDL), the company behind the Arena Central development in Birmingham City Centre, is submitting a planning application for the site’s second major office building and another for over 400 high quality apartments this week.

Fronting Broad Street and situated between the existing Alpha Tower and Municipal Bank, the striking 2 Arena Central office building will provide a total up to 212,821 sq ft of prime Grade A office space and is aimed at a major corporate occupier, creating hundreds of new jobs.

Designed by Ken Shuttleworth’s award-winning architectural studio, Make, 2 Arena Central will boast a series of interconnected blocks featuring a woven cladding pattern of overlapping masonry ‘ribbons’ to create a distinctive facade. Two exterior terraces will provide panoramic views across the soon to be refurbished Centenary Square, and there will be provision for the possibility of 13,500 sq ft of retail use on the ground floor.

Jonathan Wallis, ACDL, said: “Birmingham is lacking a deliverable office building of over 200,000 sq ft with floor plates in excess of 20,000 sq ft and 2 Arena Central aims to fill that gap. Demolition of the whole of Arena Central has already started and will be complete by the summer and we could be on site by the end of the year with completion end of 2017, ahead of the competition.”

A further planning application has been submitted for two residential buildings with more than 400 high quality apartments that have been designed by renowned Birmingham-based Glenn Howells Architects.

Located in the heart of Arena Central, adjacent to Bridge Street and Holliday Street, the simple yet strong composition of two buildings set around a landscaped podium creates an attractive address to the public square. One of the buildings will be a slender landmark at 28 storeys while the other is a 12 storey shoulder, both with generous receptions and complimentary retail uses at ground.

The site arrangement of the buildings encourages a new east-west pedestrian link across the development, connecting the Birmingham Canal to Alpha Square and providing a much needed active frontage to Bridge Street. The proposed form and orientation also benefits the new public square to enjoy the sun for most of the day.

The masonry-clad facade has a deep modelled and double-storey sculptured expression with metallic filigree, which gently responds to its orientation to provide shading while offering spectacular views. Two levels of exclusive penthouses are set behind a distinct crown top to the tower, introducing a striking new addition to the city’s skyline.

Jonathan Wallis continued: “Birmingham has never seen a truly mixed used development with offices, retail and residential sitting side by side in a highly managed, landscaped environment in the heart of the city – these two planning applications are the first stages to deliver this vision.”

The development will include a brand new public realm at its heart which has been designed by landscape architects, Gillespies. Running from north to south, it features over 40 per cent soft landscaping.

Arena Central lies at the heart of Birmingham’s City Centre Enterprise Zone and benefits from simplified planning and reduced business rates as well as forming a significant part of the city’s vision for regeneration, as laid out in the Big City Plan.

Clearance of the site is already underway with work on the new public realm set to start later this year.