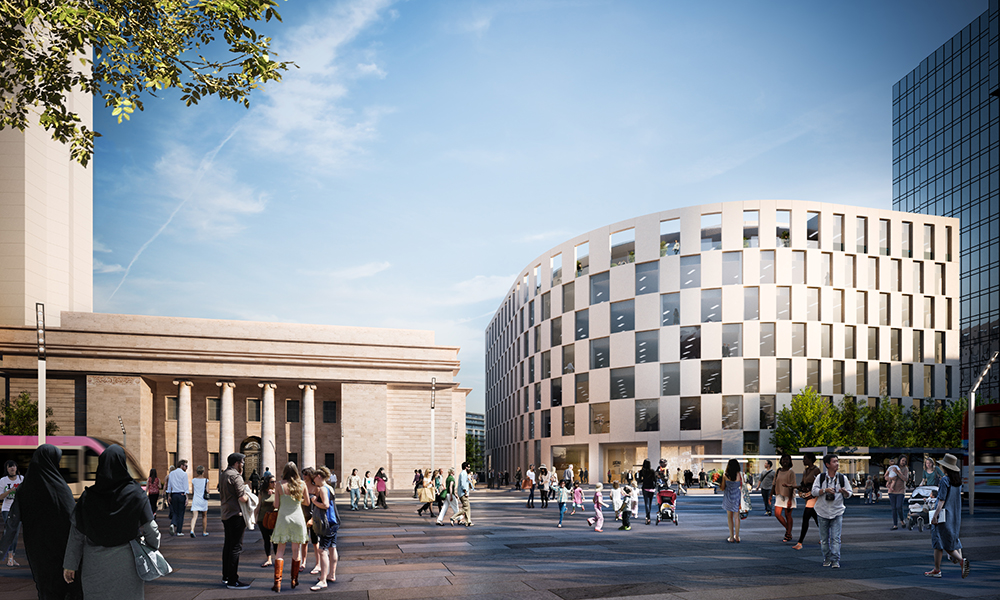 Plans have been submitted for the first building at Birmingham’s Arena Central development, designed by renowned architect, Ken Shuttleworth of Make Architects.

Fronting Broad Street and opposite Centenary Square, the 8 storey, 140,000 sq ft, 1 Arena Central will include some 135,000 sq ft of Grade A office space with typical floorplates of 21,000 sq ft. The plans also feature provision for 5,000 sq ft of retail units on the ground floor and 68 car parking spaces in a secure basement environment.

The building’s curved façade, which features a contemporary chequerboard motif, has been designed to encourage pedestrian traffic onto the site, forming an extension to Broad Street, with 2,500 sq ft of open balconies on the top floor, providing views across Centenary Square and back over the scheme.

1 Arena Central is the first step in the masterplan for the 9.2 acre mixed-use site, which is being delivered by Arena Central Developments Ltd (ACDL).

Jonathan Wallis, ACDL, said: “This is a hugely important step in the development of Arena Central and the creation of a truly mixed-use destination, featuring an office-led mixed use development, right in the heart of Birmingham City Centre.

“Birmingham’s stock on the global stage has never been higher and it is our intention to delivery a truly Grade A office space that will continue to attract the very highest quality occupiers to the city and the region, which is particularly important now, given the city’s dearth of office stock.

“Our location adjacent to Centenary Square and fronting Broad Street makes this one of the most prominent active development sites in the city centre and the plans for 1 Arena Central are indicative of the exceedingly high level product that will feature across the development.”

Working to a phased development programme, 1 Arena Central will spearhead the first phase which will also include the much anticipated new public realm, which will run from the north to the south side of the site, with a target on delivery of mid-2016.

Designed by multi-disciplinary landscape architects, Gillespies, the public realm breaks from the conventional design found in many urban developments with a minimum of 40 per cent of the scheme given over to soft landscaping, including an urban meadow and stream running through the site.

1 Arena Central has been designed by noted architect Ken Shuttleworth whose other work includes iconic landmarks such as St Mary Axe (‘the Gherkin’) and City Hall in London, and The Cube in Birmingham and whose practice, Make, is also responsible for Arena Central’s masterplan.

Ken Shuttleworth, Make founding partner said: “We are delighted to be working in Birmingham again. The opportunity to set the standard for Arena Central with the first office building and be able to contribute to one of the cities principal public spaces, Centenary Square, is just incredible.”

A joint venture between Miller Developments and Bridgehouse Capital, Arena Central is framed by Broad Street, Holliday Street, Bridge Street and Suffolk Street Queensway and lies at the heart of Birmingham’s City Centre Enterprise Zone, benefitting from simplified planning and reduced business rates as well as forming a significant part of the city’s vision for regeneration, as laid out in the Big City Plan.

Sir Albert Bore, Leader of Birmingham City Council, said: “Arena Central represents a key opportunity to unlock a prime piece of development land right at the heart of the city centre. Birmingham is continuing to reinforce its reputation as a centre for high quality, blue chip occupiers, and in order to ensure that we are able to meet the growing demand for office space in the city, it is essential that we encourage the development of forward-thinking schemes such as Arena Central.”

Arena Central is currently home to a number of redundant buildings including the former Carlton Television studios, and a leisure club, with a multi storey car park having already been demolished.
Clearance work on the site is already underway with further demolition of the remaining buildings due to commence shortly and work on 1 Arena Central and the new public realm set to start in early 2015.
Joint commercial agents on the scheme are GVA and CBRE.