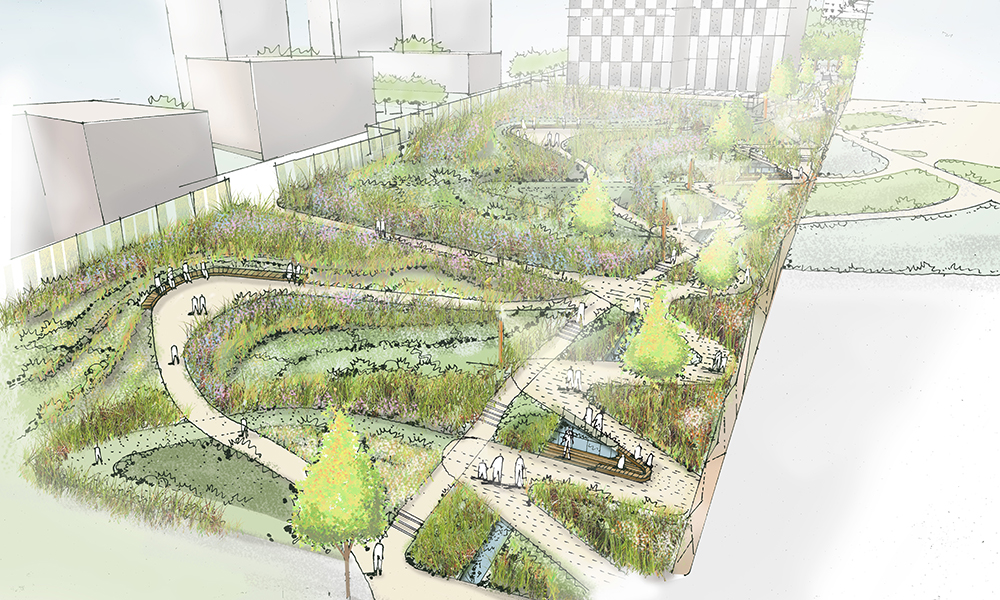 New plans for the public realm at Birmingham’s Arena Central development which echo ‘statement spaces’ and landmark urban parks have been unveiled by Arena Central Developments Ltd (ACDL).
Created by internationally renowned landscape architects, Gillespies the design for the public realm of the 9.2 acre site breaks away from the conventional institutional finishes found on many mixed-use city centre schemes, with 40 per cent of the space given over to soft landscaping.

The design features a distinctive pedestrian ‘spine’ that runs through the site, connecting the commercial and retail zones fronting Broad Street to the north with the residential districts on the south side.
There is a gradual and defined change of landscaping, with the hard granite paving closest to the commercial buildings becoming softer as it moves to the south, the stone giving way to a wild meadow at the opposite side of the site, creating the feel of a contemporary linear urban park.

Wide steps inter-linked with water features, ramps and soft landscaping connect the plot’s various elevations, with curved benches breaking up the straight lines of the pathway.

A water channel flows from the north to the south side of the development, forming a series of weirs, rills and cascades and creating a transition between the space’s contrasting environments.

Materials sympathetic to the established location will feature prominently throughout the public realm, ensuring that Arena Central forms seamlessly into its surrounding environment.

Jonathan Wallis, Miller Developments, said: “Gillespies has demonstrated a clear understanding of the design brief and our ambition for the development of Arena Central. This is a highly deliverable site that has the potential to forge even greater connections between the traditional office core and Birmingham’s West Side area, boosting mobility through the city.

“Other large-scale mixed-use developments tend to be cut from the same cloth, but the intention for Arena Central has always been to create a public realm that reflects an inviting, urban park environment rather than just another hard concrete space between buildings.

“We have always envisaged Arena Central as being aligned with some of the world’s greatest statement spaces, such as the High Line in New York City and with almost half of the space given over to soft landscaping, Gillespies has produced a design that perfectly echoes our aspirations.”

A multi-disciplinary design practice, Gillespies’ experience encompasses all phases of landscape and urban design across a host of sectors in locations including Europe, the Middle East, Asia and the Americas.
Bill Basterfield, Associate at Gillespies, said: “We are naturally delighted to have been appointed to Arena Central, which will provide Birmingham with an abundance of new office, retail, residential and leisure space in a high profile city centre location.

“In formulating this design, we have taken inspiration from existing public spaces in densely occupied urban locations, encouraging people-flow through a light, airy public realm that provides an oasis away from the hubbub of the city centre. Our design incorporates a linear grain to the central spine that dynamically transitions from hard to soft material elements as it passes through the various development typologies of the site.”

Bordered by Suffolk Street Queensway, Broad Street, Bridge Street and Holliday Street, work is now poised to begin at the Arena Central site, which has already received outline planning consent for the delivery of up to 2.3 million sq ft of mixed-use development.

A joint venture between Miller Developments and Bridgehouse Capital, Arena Central is at the heart of Birmingham’s City Centre Enterprise Zone, enabling it to benefit from simplified planning and reduced business rates as well as forming a significant part of the city’s vision for regeneration, as laid out in the Big City Plan.

Joint commercial agents on the scheme are GVA and CBRE, with Knight Frank appointed as residential agent.