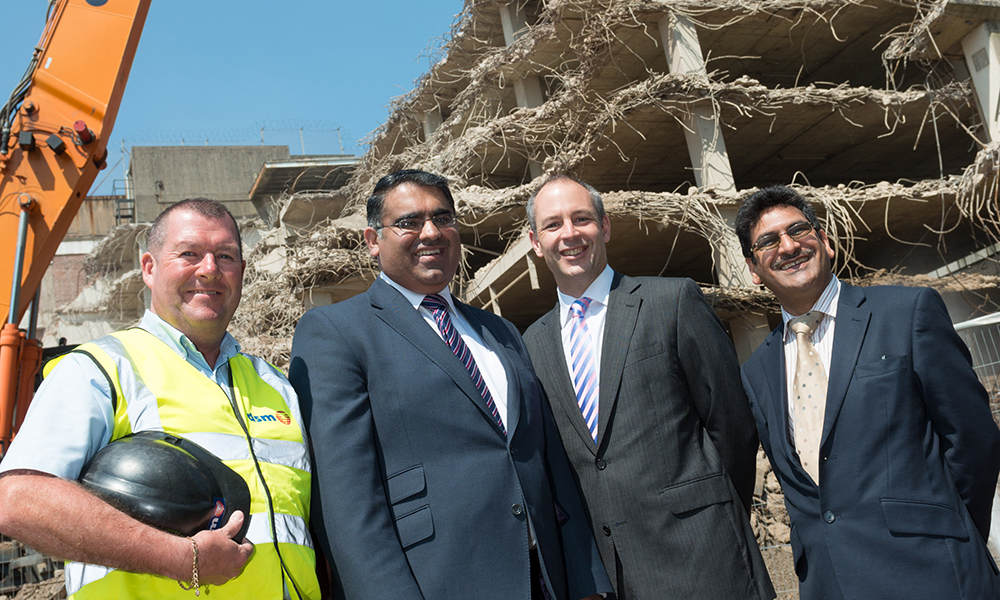 The redevelopment of Birmingham’s Arena Central is well underway, with demolition works clearing the way for the construction of a brand new hotel.

The demolition of a redundant multi-storey car park at the corner of Holliday Street and Bridge Street is the first step towards the construction of the planned 210-bedroom Holiday Inn Express.

The 14-storey hotel will include an atrium link to the adjacent Crowne Plaza Hotel. Once completed, the Holiday Inn Express will back onto Arena Square, forming a key part of this office-led mixed use scheme.
The demolition work is being undertaken by specialist contractor DSM, based in Heartlands, Birmingham.

Jonathan Wallis, Development Director, Miller Developments, said: “Arena Central forms an integral part of Birmingham City Council’s Big City Plan as well as having a prime position within the City Centre Enterprise Zone and I am exceptionally pleased that we have been able to appoint a local company to undertake these works.

“Alongside the development of the hotel, we are working closely with Birmingham City Council to deliver the site’s next commercial building of around 110,000 sq ft, which is planned to sit in a prominent position fronting Broad Street.

“This site is one of the most strategically important locations in the city and our proximity to the Library of Birmingham, the established city core, Brindleyplace and The Mailbox will undoubtedly help to create a fully connected, 21st century location.”

A joint venture between Miller Developments and Bridgehouse Capital, the 9.2 acre Arena Central site is at the heart of Birmingham’s City Centre Enterprise Zone, meaning that it benefits from simplified planning and reduced business rates as well as forming a significant part of the city’s vision for regeneration, as laid out in the Big City Plan.

Bordered by Suffolk Street Queensway, Broad Street, Bridge Street and Holliday Street, Arena Central has also been shortlisted as one of 18 national projects for the Government’s recently announced £59 million Local Infrastructure Fund (LIF), administered by the Homes and Communities Agency.

Supported by the Birmingham and Solihull Local Enterprise Partnership, the aim is for the grant to fund the demolition of the remainder of the site and constructions of a new pedestrian link between Broad Street and Holliday Street creating a number of oven-ready development plots on the site.

Councillor Tahir Ali, Cabinet Member for Development, Jobs and Skills, Birmingham City Council, said: “Arena Central is an ambitious mixed-use scheme with a key position in the City Centre Enterprise Zone, to which I give my full support.

“Projects such as this are vital to the on-going redevelopment of Birmingham and with an established central location I believe that Arena Central will be of real interest to a wide variety of occupiers, further boosting the reputation of the city and region as a whole.”

Outline planning consent for Arena Central is already in place for up to 2.3 million sq ft of mixed-use development, including 800,000 sq ft of Grade A office accommodation, hotels and residential units of over 200,000 sq ft alongside up to 1.2 million sq ft of retail/leisure units set within well maintained public realm.

Construction on the new hotel is expected to commence in the second quarter of 2014 and be completed in early 2015.